Posted on September 22, 2015 by Richard Darlington — Leave a comment 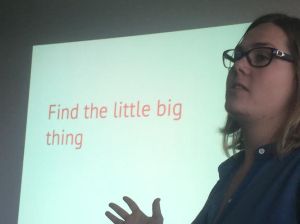 Kat Sladdon, a campaigner from online petition site change.org, was in Nairobi, speaking at the invitation of Well Told Story at the African Population and Health Research Centre (APHRC). It’s not the first time she’s talked about ‘the little big thing.’ Here she is giving a ten minute TED talk. 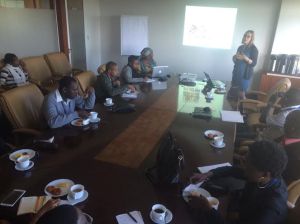 So what is ‘the little big thing’? It’s the first step. The winnable victory. The intoxicating feel of victory that comes when you prove that you have the power to change something.

Meet Caroline. She’s a feminist campaigner and her ‘big thing’ is gender equality. But she inspired a movement, created a community and smashed through the corridors of power by asking for a ‘little thing’. She asked the Bank of England to put a woman on a bank note. When her campaign succeeded – next year British author Jane Austin will be on the ten pound note – it was not the end, but just the beginning. When Caroline and her fellow campaigners were targeted by sexist abuse, they asked Twitter to introduce a ‘report’ button. The first campaign won with 36,000 supporters and the second won with 140,000 supporters.

Victory is empowering but it is also intoxicating. Nothing inspires people like victory. And that’s the power of ‘the little big thing’. Ask people to support a campaign aiming for something that is too big and they might ask ‘can it really be done?’ or ‘can I really make the difference’? But ask people to support a campaign for a little big thing and then show them you can win… Well… who knows where it could end.