It’s got me thinking hard about strategy, advocacy and how to use brilliant communication of high quality data and evidence to change the world for the better.

Having a good story to tell does nothing for you, unless you tell it well

There are incredible things happening across Africa right now but there are forces that are conspiring to keep them well kept secrets.

Lots of organisations working in Africa have huge and long-term goals that have them focused on major and systemic change. Their aims and objectives are nothing short of revolutionary. But in that context, many organisations are so focused on objectives in the long-term future that they ignore their own incremental victories along the way. Rather than standing out by communicating like revolutionaries, they end up melting into the background and appearing to be simply part of the status quo.

Sometimes we get so caught up in the process of change we are trying to create, we forget to reflect on where we are in our journey. An external perspective can help because explaining your journey to someone who has not travelled with you, forces you to explain where you’ve come from and where you’re going. Journeys have narratives and can be told as stories. They also have staging posts, which can operate like chapters in a book or acts in a play.

There is a real risk that think tanks and research-led organisations that don’t tell their own story limit their capacity to achieve their ultimate goals. Showing and explaining incremental changes, as well as celebrating battles won in a wider campaign, is crucial to maintaining momentum and retaining the confidence of funders and supporters.

The ‘data revolution’ is the new ‘Africa rising’

Data is everywhere in Africa right now. There is a ‘data-revolution’ but also major ‘data-gaps’. There are big challenges around scrapping and cleaning ‘big-data’ but some of the most interesting data is being collected at micro-level.

Citizen-led assessments, for example, test children in their own home and offer data on attainment and achievement is stark contrast to the data collected in schools. Schools themselves are recording teacher absence by reporting using daily text messages, pushing up attendance and cutting absenteeism.

Some see the next frontier as ‘open-data’ so that anyone can use your data, while others want a focus ‘data-synthesis’ so that we can make sense of what we’ve already got. While I was in Kenya, I was told that 95% of Randomised Control Trials fail to conclude anything because at the start of a trial you need to accurately forecast the affects you are trialling.

Data on the utility of data… where will it all end? There is a whole new discourse (and even pedagogy) being created around the Sustainable Development Goals devoted entirely to debating data, its utility, validity and accuracy.

Yet despite all this data (and discussion of data) swirling around, there is still a big gap between the brilliant data that Africa has and the capacity for African think tanks to effectively visualise it.

4G is going to change everything

A year ago, I sat in Nairobi discussing the problem of ‘link anxiety’ whereby people are reluctant to click on a link because it might crash their wi-fi network or wipe out all of the pre-paid credit on their mobile phone. But 4G has now arrived and is going to change everything. 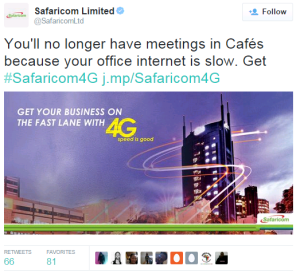 In Kenya alone, Nairobi and Mombasa now have 4G and Safaricom is going to roll out its 4G network in 13 more towns and cities by the end of the year. Seven out of ten Kenyans already have access to 3G.

Why does this matter? Because it will accelerate the changing way that people consume media and interact online. The proportion of Kenyans who read a newspaper yesterday was 8% but in 2002 it was 38%.

It’s not just in coffee shops and offices where things will change. Now 4G has arrived, the newspaper sellers at the junctions who weave their way through the traffic jams are going to increasingly compete with all that the global internet has to offer. As 4G roles out across the rest of Africa, it’s going to change everything.

Richard Darlington is joining Well Told Story to head up their strategic communications and advocacy work in September. He is a co-founder and original member of the WonkComms editorial board.