A trouble shared is a trouble halved. And those of us in think tanks and research organizations have a lot of sharing to do, especially on the challenge of digital communication. That became clear to me, if it wasn’t already, during the Digital Publishing Fair and Roundtable hosted last week at the Center for Global Development.

The event brought together about 30 communications professionals from a dozen of DC’s think tanks and government research organizations including (among many others) David Nassar of the Brookings Institution, Harold Neal and George Estrada of the Center for American Progress, Jeff Stanger of the Center for Digital Information, Mary Maher and Molly Garber of the USDA Economic Research Service, Ed Paisley of the Pew Charitable Trusts, and David Connell of the Urban Institute. Kurt Volcker of ForumOne designed the roundtable to build off of Jeff Stanger’s Beyond the PDF event from February 2012.

With backgrounds in publishing, web development, IT, and communications, we were all thinking about strategies for staying at the forefront of the shift from delivering content digitally  to creating digital content. Five years ago perhaps we could PDF a report and call it a day. Today, it’s not enough: short attention spans, mobile devices, fiercer competition, and raised expectations mean we have to think digitally from the beginning to create reports people want to read, videos they want to watch, content they want to share.

There are some great examples  of digital communication and storytelling out there—“Snow Fall” from the New York Times and Bill Gates’s 2013 annual letter come to mind. These and others—see the Center for Digital Information’s showcase for more—do a great job of communicating in a way that only the web can, with an interactive mixed of text, graphics, video, and audio.  They’re great examples of what organizations can do for big projects  . . . when they have the time, money, and staff to make it happen.

But what about the white papers and briefs and reports that make up the workflow of a think tank, research organization, or government agency? Not every brief or newsletter can be, or should be, like “Snow Fall.” But they should be shareable and share-worthy, accessible across platforms, and have room for web-native media. Many of us are taking steps in the right direction. During the show-and-tell fair portion of the meeting, Molly Garber of the Economic Research Service of the US Department of Agriculture was rightly proud to show off their new iPad app for their magazine, Amber Waves. The transition opens them up to multimedia content and begins to leave behind the legacy design-for-print-but-post-to-the-web process that many of us are stuck in.

I spoke a bit about my process of creating full text HTML versions of CGD briefs and other publications (examples here and here). So far they’re mostly web-optimized versions of print products (and so fall into the delivering-content-digitally category), but they could and should include video, audio, and motion graphics—content we often make anyway, but for separate content types.

The process of producing is relatively simple but certainly idiosyncratic. In Word, I apply the paragraph styles that will become HTML classes or IDs. I save that file as filtered HTML (which, from Word, is hardly filtered at all), open that file in a text editor (Notepad ++) and run a macro of RegEx search-and-replace strings to clean up the code and move things around. I then put that code into the template. Some tweaking is usually needed, and the metadata and anything additional (making microcontent like graphs or pull quotes shareable) has to be done by hand. It’s far from perfect, but it works without adding too much time to the production process. 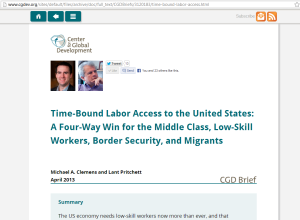 These and other efforts are steps in the right direction. Have we solved the problem? No, not even close. The roundtable participants had, like me, more questions than answers. But it was useful and heartening to find that so many others are facing the same difficulties. Kurt Volcker kicked off the roundtable by asking what keeps us up at night. Many of us are nagged by the same issues:

Truthfully, we didn’t get much further than the airing of grievances, leaving some frustrated by the lack of answers. It’s a good frustration, though; at least we’re not alone. I hope and expect future meetings to focus on subsets of the problems and begin to not only halve our troubles but double our solutions.

I am the Director for Digital Communications at the Center for Global Development, a DC-based think tank turning ideas to action with world-class research, policy analysis, and innovative communications.